Petra de Vree is born in 1960 in Batenburg, a small picturesque town in the Netherlands. In 1982, during her art studies, she traveled to Africa for six months. She took the opportunity to explore the land of the Egyptian Pharaohs and the Kenyan Maasai, as well as traveling down the White Nile in Sudan and to the interior of Uganda. This  journey had a powerful impact on her life and art, being a definitive turning point.

After completing her studies, Petra taught visual arts at various schools in the Netherlands. Then, she and her husband choose to live abroad, moving to Nepal in 1993. While in Kathmandu she designed innovative wooden toys  and learned to manually create her own paper. In the fifteen years that followed she worked in Bolivia, Ghana and Guatemala. Here she started workshops and created her own furniture line from metal combined with wood and handmade paper, adapting the style to the culture  and  available materials of each country. 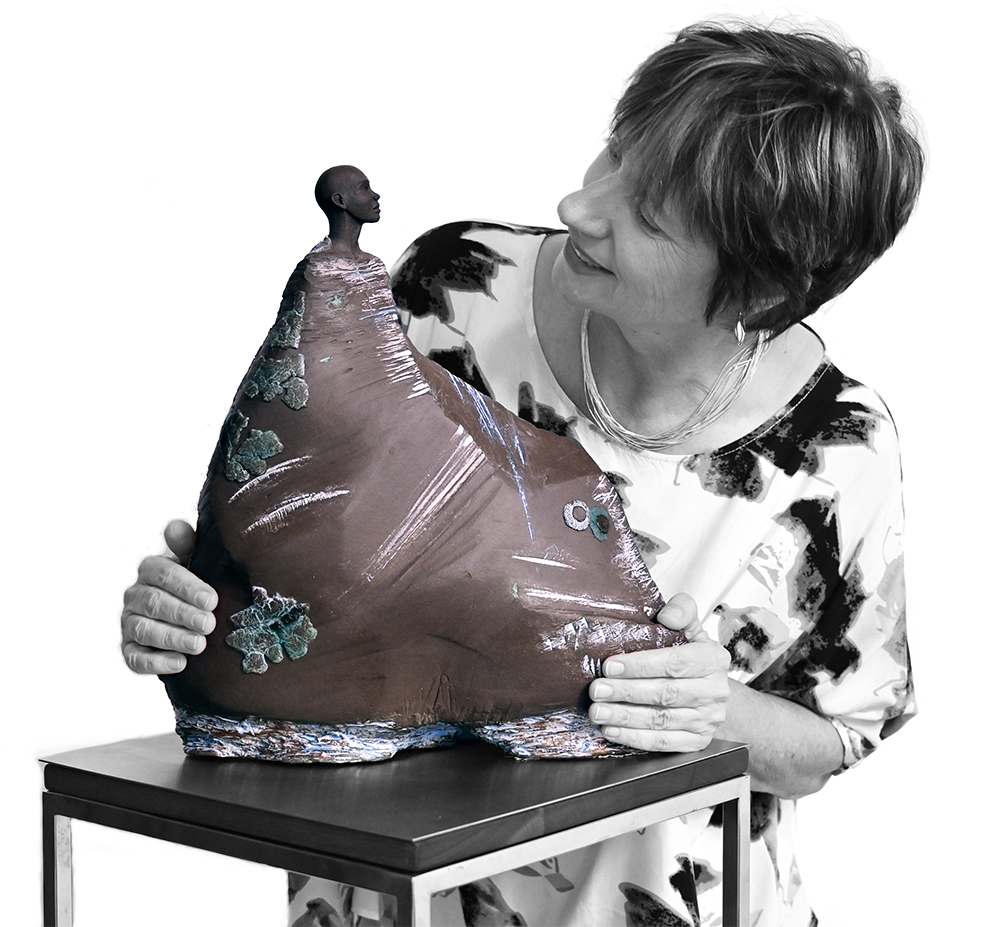 In 2006, while living in the highlands of Bolivia, Petra rediscovered her love for clay.  This felt like coming home: everything she had done before had been satisfactory, but in clay all the pieces of her life fell together. She rapidly developed the distinctive and recognizable style that her work shows today. The  years spent on four different continents  influenced her development as an artist and her style.

The sculptures Petra creates show pride and  confidence. Her work combines aesthetic forms and natural lines to give each sculpture a personality of its own. She considers that every human is unique, and this is what she aims to express in her work. “We look alike, but all have our distinguishable personality and appearance.”

In 2008 she returned  to the Netherlands for six years. During this period she became known by art lovers here. Her sculptures were purchased by the Netherlands Society of Cardiology, the municipality of Wageningen and the Network for Wageningen University Women’s Alumni.

In 2014 Petra continued her carrier in Dhaka. Three years living in Bangladesh had a profound influence. Poverty and underestimation of female talents were visibly present. While terrorist threats kept Petra mainly in her studio, she chose to search for the positive. The stunning colors of the saris and the fertile soil became her main sources of inspiration. Exotic seed pods and other creations of nature were too beautiful to ignore; this can be observed in her sculptural works.

In 2017 Petra moved to Hanoi, her latest residence abroad. She worked on two projects. Treasures of Earth expresses the relationship between humans and nature. It is based on the landscape of Ha Long Bay in the North of Vietnam. The last project has the  title ‘Focus on the Lotus’. The Lotus is Vietnam’s national flower. Soon the  results of this project will be shown on the website.

Since September 2022 the artist has her residence in The Hague, The Netherlands.

The energy and passion of women from many different cultures worldwide are my main sources of inspiration. I like to portray us powerfully, positively, proudly and confidently; full of hope in our ultimate femininity and great diversity.

Living for many years abroad on four different continents is a great privilege for a European artist. The unique blend of different cultural impressions are one of the inspirations for my work.

Since childhood I have enjoyed all kinds of shapes in nature – smooth sloping lines of a landscape, shapes of fruits or the spiral growth of a vine, the beautiful colors of fish and birds, the unique phenomena of the sea world, the rough texture of a plowed land. It’s all there; I only have to be aware of this beauty, and open my eyes and watch it.

I feel essentially connected with clay as a medium. I love to play with it in order to discover new possibilities. Driven by my own curiosity about who the woman will become, I sometimes can hardly stop working. Through my hands, eyes and fingers I strive to a perfection in aesthetic forms and natural lines, giving each sculpture a personality of its own.

For me it is always a wonderful experience when a glazed sculpture comes  out of the kiln. I am surprised by the interesting mix of colors and at the same time the recognition of the personality. It’s a kind of deja-vu, as if she always has existed and is simply supposed to be here.

Art conveys emotions. By creating something that was not there before, I experience intensively the surprise of beauty. This makes me happy and passionate. The best compliment that I can get from buyers is when they let me know that after years of possession they still get strength and inspiration from my sculptures. Knowing that my work can do this to other people completes the circle and provides renewed inspiration for the next  sculpture. I look forward to creating!